It is with great joy that we announce the completion of the second floor of the girls’ dorm, accompanied by a festive chanukat bayit. The mezuzah ceremony was led by HaGaon Rav Aharon Toisig shlita, a leading rabbi of Bnei Brak and Israel, who graced the occasion with inspiring words of Torah and moving blessings for the children and Keren Hayeled. 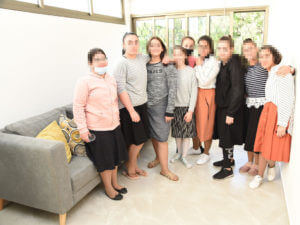 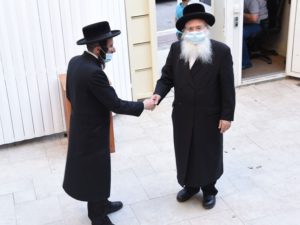 After a glowing reception, Rabbi Meyer Godlewsky accompanied the Rav on a tour of the facilities, including the newly-renovated courtyard. Rabbi Toisig showed much interest in the recreational and exercise equipment, especially asking to take pictures on the swing. He explained that once, at the founding of a new religious city, the great Rabbi Wozner ztz”l asked, “Will there be playgrounds and grassy areas for the children?” People were astounded that he did not inquire about the shuls and yeshivot. “You’re planning buildings for families who will have children, and children need places to play!” 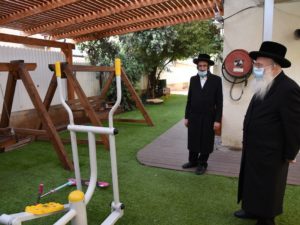 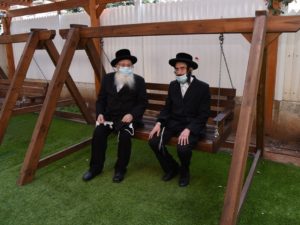 The tour continued to the newly renovated 2nd floor where the Rav conferred moving, heartfelt blessings to the girls, who were separated into small groups because of the corona situation. But that just made the blessings even more personal! 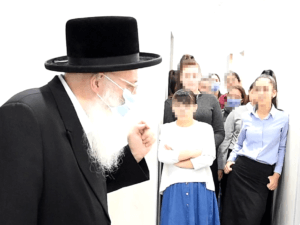 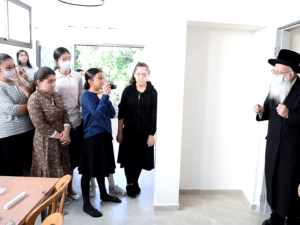 In a very touching moment, Rabbi Toisig addressed a girl from a very difficult background with serious behavioral issues. To the surprise of the staff, she requested a blessing for more brothers and sisters?! This demonstrates Keren Hayeled’s success in dispelling despair and restoring hope in these troubled children for a happy childhood and a brighter future! 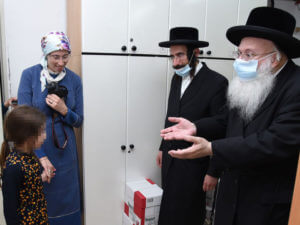 Leah’s pure heart and the rabbi’s emotional blessing brought tears to all!

At the ceremony, the Rav spoke movingly of the protective nature of the mezuzah, citing many instances where misfortune resulted from a faulty mezuzah. He noted that the Hebrew letters shin, dalet, yud on the outside of the scroll which form one of G-d’s names are also an acronym for the phrase, “Shomer Delatot Yisrael” – “Guardian of the Doorways of Israel.”

He told how Rabbi Yehuda HaNassi sent a mezuzah to the Roman leader Antoninus. The non-Jewish ruler, who was not lacking wealth and certainly had no need for some small parchment, asked the meaning of the gift. The rabbi answered, “You have thousands of soldiers who guard you, your palace and your kingdom. But the gift I’m giving you guards you and your home at all times whether you’re there or not.” Antoninus was so impressed that he converted to Judaism. 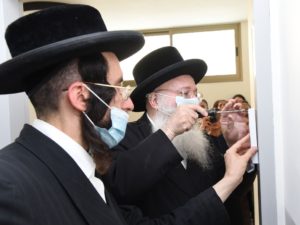 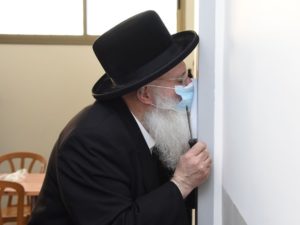 The Rabbi then affixed the mezuzah with an uplifting, inspiring bracha to which the excited students answered an enthusiastic and resounding “Amen”! He then blessed the girls that in the merit of the mezuzah, G-d shall guard and protect them at all times, in all places, in all their endeavors, and guide them to build happy and stable homes with righteous, blessed offspring! 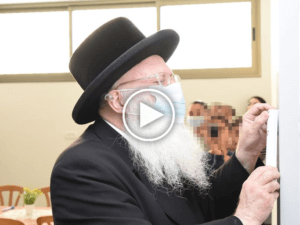 At the concluding l’chaim, the representative of the donor organization said that the sincerity, sacrifice, and hard work of people like directors R’ Meyer Godlewsky, Leah Davidowics, and their staff inspire his organization to give their most and best to Keren Hayeled. He added that Keren Hayeled’s heart-moving efforts on behalf of such needy children are a blessing for the entire Jewish People. In closing, he praised Keren Hayeled for being the embodiment of action, family, community, society, Judaism, and partnership, thanking Keren Hayeled for “bringing us into your Home and inspiring us to be better people”.

Surely, hearing the testimony of those from outside Keren Hayeled who witness firsthand what goes on inside Keren Hayeled affirms your appreciation of what we do and your partnership with us. Please continue to contribute generously so that, together, we may continue to build a better future for all of Israel! Selecting “Make this donation monthly” will ensure this.