As you may recall, last fall we held a mezuzah affixing ceremony led by HaGaon HaTzadik Rabbi Yitzchok Zilberstein shlita, who is the Rabbi of Ramat Elchanan in Bnei Brak, and son-in-law of Rabbi Shalom Yosef Elyashiv ztz”l and brother-in-law of Rabbi Chaim Kanievsky shlita.

Rabbi Zilberstein has a long-standing relationship with Keren Hayeled, for which he has a very warm place in his heart.

At the ceremony, he recalled the founders of Keren Hayeled, whom he thanked for their great contribution to the Jewish People for this institution, and whom he said were fabulous, exceptional people who were truly righteous.

He also said that even though Hashem dwells in every Jewish home, there is an extra degree of Divine Presence in Keren Hayeled. He said that this is because Hashem is referred to as “The Father of Orphans”. So as a father to these children, Hashem dwells right there with them. 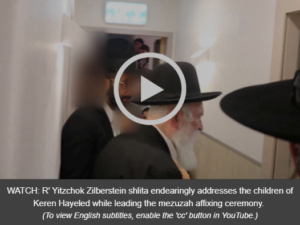 As part of Rabbi Zilberstein’s ongoing, special interest in Keren Hayeled, he recently sent us a personal, moving letter of encouragement during these difficult times surrounding the corona virus. Referring to the Talmudic Sages’ explanation of Devarim 16:11, he writes:

“There is a Heavenly Law in which G-d says, ‘If you will gladden four of Mine (the orphan, widow, convert and Levi), I will gladden four of yours (you, your wife, your children, and your servants). How meritorious are you that you gladden orphans, G-d’s children, and encourage them to believe and trust in Him! In this merit, may G-d gladden you and spare you from the epidemic and may there be heard from your Home the sound of rejoicing and happiness, and of Torah and loving-kindness. Yitzchok Zilberstein.”

In connection to Rabbi Zilberstein’s special regard for the founders of Keren Hayeled, the period before Pesach marks the yahrzeit of Rebbetzin Pearl Penina Frummet (bat Moshe Dovid David, and wife of  R’ Yosef ztz”l) Godlewsky a”h, on the 12th of Nisan (this year, from nightfall Sunday to nightfall Monday, April 5-6). 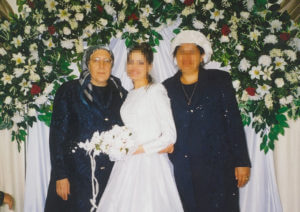 At this season, Rebbetzin Godlewsky always combined practical advice for Passover cleaning, with a strong emphasis on promoting taharat hamishpacha and the need to cleanse one’s soul together with providing for the lonely and needy, such as the children of Keren Hayeled.

In the spirit of Passover and in the spirit of Rebbetzin Godlewsky who dedicated her life to redeeming desperate children from suffering, please give a suggested donation of $100 to ensure that each child has a Seder!

Thank you for your generous support, and in the merit of your donation, may you and your loved ones have a kosher and happy Passover!